Sky of multiplying stars,
allow eyes to trace
arcs and lines, give

life to myths and dreamt
histories. Nothing can stop
sand from glistening

on feet not yet numb
from icy fingers
of these Antarctic waters.

There will always be
something between us.

Jim Pascual Agustin writes and translates poetry in Filipino and English. He grew up in the Philippines during the Marcos dictatorship. He moved to Cape Town, South Africa in 1994. Some of the publications where his work has appeared are New Coin Poetry (SA), Rhino Poetry (USA), and Modern Poetry in Translation (UK). His books of poetry before leaving Manila are Beneath an Angry Star (Anvil, 1992) and Salimbayan (Publikasyong Sipat, 1994). Two books were simultaneously released by the University of Santo Tomas Publishing House in Manila in 2011: Baha-bahagdang Karupukan (poems in Filipino) and Alien to Any Skin (poems in English). The same publisher released two new collections in 2013: Kalmot ng Pusa sa Tagiliran (poems in Filipino) and Sound Before Water (poems in English). A new poetry collection, A Thousand Eyes, and a short story collection in Filipino are forthcoming from USTPH. He blogs on www.matangmanok.wordpress.com. 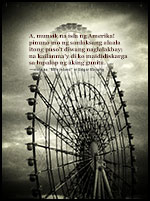