The Quest for a Spiritual Home 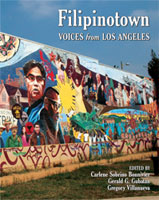 In a book about Filipinotown, there should be the voice of at least one visitor, someone who hails from somewhere else but who, finding himself here, knows he has arrived at not merely a stop or way station but perhaps a destination. I am happy and honored to be that voice.

There are many Filipino centers across America…And it would be a disservice to all of them if one were designated as the center. The center is us.

I am not from here nor can I claim to know what this place is and who its citizens are. Just a few years ago Historic Filipinotown, to me, was just a freeway sign, a cultural tidbit, something that other Pinoys would mention in passing. “Oh yeah, it’s just off the 101, there’s not much there.”

And the word “Filipinotown,” for this Pinoy who grew up in Bikol and who didn’t move to the U .S. until 2004 when he was in his thirties, actually meant the intersection of Amar Road and Azusa Avenue in West Covina, where there’s a big Seafood City, an LBC, a Pinoy bakeshop, and a host of Filipino restaurants. What other Filipinotown could there be? What else did I need?

Then, thanks to a mural, I found out.

A celebration of Filipinotown’s designation as a “Preserve America Community” in January 2012 by the Federal Advisory Council on Historic Preservation made me give a long hard look at the mural by the artist Eliseo Silva, at Filipinotown, and Filipino-American history itself.

Before the program, held at Unidad Park on Beverly Boulevard, I had a chance to talk to Silva, who struck me not only as an artist who was passionate about his art, but truthfully as an angry young man, bent on telling the story of his people. I asked him, on another occasion, why he seemed so determined on this project. His reply was “Because I only have one life.”

I started to wonder what this man was so worked up about. Was I missing something? The answer lay in his Filipinotown mural, called Gintong Kasaysayan, Gintong Pamana, or Golden History, Golden Heritage. The 150-foot-long artwork, Silva’s first mural and one of the largest that he’s created, not only highlights, but in truth celebrates the watersheds and important figures of Philippine and Filipino-American history.

Philip Vera-Cruz and Larry Itliong, who led the famous Delano grape strikes of the 1960s, are there. So are Emilio Aguinaldo, Carlos Bulosan, Ninoy and Cory Aquino, our World War II veterans, and many others. Historic Filipinotown itself is there somewhere. It’s a lesson on history, in living and resplendent color, and it began my own education.

I continue to learn. And, as with all true education, there is no stopping. To this day, each time I attend an event in Filipinotown, whether it’s a gathering of authors at the Echo Park Library (where a Philippine Heritage Collection was instituted in 2012) or a festival at the Silverlake Medical Center at Temple Street and Burlington Avenue, I feel as if I’m finally getting at something.

And it is this: There are many Filipino centers across America. Whether it’s in San Francico, Philadelphia or New York, Filipinos have had a long and undeniable history in this country. And it would be a disservice to all of them if one were designated as the center. The center is us.

But to this traveler Filipinotown holds a special place. Carlos Bulosan himself, an icon, a legend, in Filipino-American history, walked some of these streets and haunted its bars and speakeasies (some say, a little too much). Not too far away is the Los Angeles Public Library where he practically lived.

Filipinotown continues to draw us in. It welcomes us and sustains us, like a home.

Lorenzo Paran III, or “Third” as his friends call him, is a copy editor and page designer for the Los Angeles Group, but also heads Pinoy in America, which publishes Salamin, a magazine about Filipino art and culture in the Greater Los Angeles Area. He was an English teacher before moving to the U.S. in 2004. He wrote about his experiences as an immigrant in the book An Isteytsayd Life: Not-so-random thoughts from a Pinoy living in America, published by the University of the Philippines Press.

from the editor's laptop

The Quest for a Spiritual Home
Lorenzo Paran III